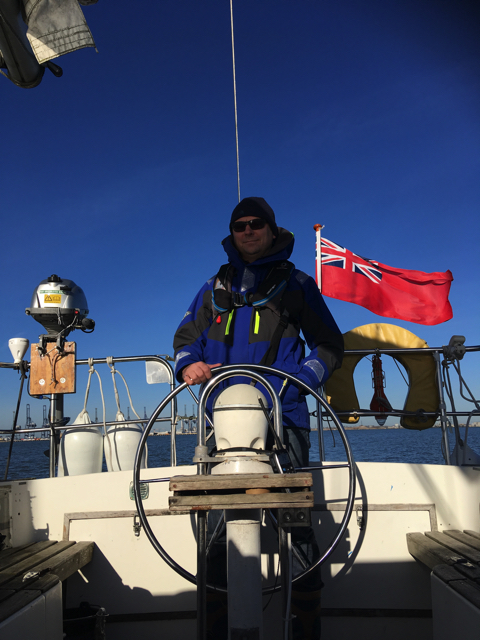 Whether Sailing the High Seas or the Economic Ocean, don’t lose sight of your goals

Whether Sailing the High Seas or the Economic Ocean, don’t lose sight of your goals

Boulogne or Bust, at sea with the Astro team

My elder daughter is a big Knight Rider fan. She has watched every episode of all of the original series’ several times over. Watching some recent episodes with my daughter makes me realise just how clever the series creators were and how much of the then futuristic technology is now a reality. I have an Apple Watch and when my hands are full I sometimes take a call and hold a conversation through my watch. On several occasions people (the nicer people at least) have referred laughed and referred to Knight Rider. On one episode a young IT geek hacked into KITT – Knight Industries Two Thousand, the autonomous car with a mind and a wit of its own – and took control of its central processor for sinister means. Although real life autonomous vehicles are not quite up to KITTs standard, they are getting close and in recent years hackers have gained remote access to vehicles via their in car entertainment systems and taken control of vital functions including steering and brakes.

“Last year, Astro MD Steve Hodges bought a sailing boat by accident. I will repeat my last statement should anyone think Microsoft spell or grammar checker had got the better of me.”

A few days ago we watched an episode where the main character Michael Knight was heading off for a weekend’s sailing. While parking the ultra logical KITT at the marina Michael was trying to explain what was so special about setting off on a sea journey at the mercy of the wind and tide. KITT reminded Michael that the last time he set off on a voyage of discovery he didn’t make it out of the harbour and returned only an hour later. Then by pure coincidence the next day I saw a blog written by our good friend and Astro accountant Tim Levey and it struck a real chord with me.

Tim mentioned in his article that one of his clients was advised to concentrate on the here and now and the next few steps that they needed to take and ignore the goal on the horizon. Tim expertly uses some sailing analogies to demonstrate why this approach is fundamentally flawed. I was staggered to read that someone would give such advice.

“Mr Hodges had a boat, a plan, some sailing experience and now a crew of two SAS…”

All the components to achieve the desired goal were in place. Mr Hodges had a boat, a plan, some sailing experience and now a crew of two SAS (Somewhat Able Seamen) with a healthy combination of enthusiasm and fear to keep them focussed on the job in hand and the instructions being issued by Cap’n Hodges. The initial voyage was long and arduous at a breathtaking top speed of 3 – 4 Knots. And so it was that our intrepid explorers set sail for Chatham in brilliant sunshine. However, by the end of the voyage the sun was up on faraway shores. But Cap’n Hodges knew that and his flawless plan accounted for one of the crew to on watch at the bow with a torch. Masterful! The voyage ended minus incident (or speed) with all crew members accounted for. Without a plan and a clear idea as to what the end goal was Cap’n Hodges and his crew could be drifting precariously around Cape Horn right now.

Although this is a light hearted account of Mr Hodges maiden voyage in his newly acquired boat, it has a serious message. The crew knew the end goal and under Steve’s leadership they arrived safely at their destination. On this occasion everything played out and the initial plan survived the length of the voyage. Tim uses an example of a more recent Astro team voyage across the channel to demonstrate his point. The original intention was to set sail for Ostend, however, after taking advice from the experienced crew leader from Elite Sailing and taking wind and tide conditions into account Boulogne was considered a more sensible destination. As the German military strategist Helmuth von Moltke said “No operation extends with any certainty beyond the first encounter with the main body of the enemy.” In the case of the trip to Boulogne, several factors had to be taken into consideration – available time, wind direction, tide – and the plan was adjusted accordingly.

But was this changing the overall goal of the weekend? On this occasion maybe, maybe not. That depends on the goal. For some the goal was to sail to foreign shores and have a relaxing time on shore and then set sail back home. For others, it was more important to sail to somewhere new and take on the challenge of battling against the wind and tide to get to Ostend, even if for only a short visit.

Sailing can provide us with some good business analogies but even better business benefits such as leadership, team work, problem solving and confidence building. My younger daughter Sarah has been a crew member on several Astro sailing trips – some over several days through all types of weather. Sarah suffered quite badly during her early sailing trips, and that would have stopped many people from ever setting foot on a sailing boat again. But, Sarah persisted and took every opportunity to sail with the Astro team and is now comfortable at the helm even when the weather is not so friendly. She was one of the crew sailing to Boulogne that weekend. One of the team, working towards the goal of sailing to (and from) Boulogne through the busiest stretch of water in the world where so many factors could change and upset plan. But they did indeed achieve their goal and had a fantastic time in Boulogne and during the journey to and from.

From personal experience I can really relate to the message Tim put’s across so well in his blog. Several years ago we would not have even considered an Astro team sailing trip across the Thames let alone across the English Channel because we didn’t have the knowledge to even know where to start. Nor did we have any clear business goals, we were drifting and lacking direction just like the dinghy sailors off Herne Bay. As a founding member of Astro I am the first to admit that the fun we experienced for over 20 years had gone. That lack of direction led to a dysfunctional business and we were in danger of ending up drifting onto the rocks.

“… we have direction, we have purpose and we are having a lot of fun along the way.”

Fast forward five years and now under the leadership of Mr Hodges, we have direction, we have purpose and we are having a lot of fun along the way. In the past year alone we won the Dartford and Gravesham Business Awards, we were runners up in the Kent Megagrowth Awards as one of the fastest growing companies in Kent, our MD was a finalist in the Internet Service Providers Association Executive of the Year Award, one of our sales team was a finalist in the BESMA Rising Star Award, our Apprentice was a finalist in the Apprentice of the Year Award and there were more. We have regular team events and activities for our staff and we live by our coined hash tag #workhardplayharder. Someone recently said that Astro is like a 33 year old startup. I believe that sums us up very well. I am incredibly proud of the whole team and also incredibly lucky that (albeit very part time these days) Astro is even more exciting to be in now than it was when we started the business in 1984.

Thank you Tim for a very interesting blog and congratulations on getting published in the South Set Business Magazine! You can read Tim’s blog here.

But what about Michael Knight and his voyage into the unknown? Unfortunately for him the Foundation for Law and Government called him away on yet another dangerous assignment and on his return his sail boat (a dinghy) had taken on too much water. Maybe KITT was right, Michael Knight should steer clear of the water in favour of more land based pursuits.