Time to hear the Lightning roar

I am one of life’s fortunate few, by that I mean I got to do the thing I always wanted to do and for me that was to work on fast jets.  Once it was pointed out to me that I was as blind as a bat and was duly fitted with my wire ended National Health jam jar bottom specs, the potential to fly anything was removed so from the age of 5 it was my lifes ambition to work on fast jets.  The following years spent, like many my age, building Airfix models and stringing them up from my bedroom ceiling, getting my first job at aged 12 and joining the Territorial Army at 16 and half dampened not one bit my quest.  So 13 years later, having left the TA and joined the Royal Air Force I got my first choice posting and was heading over to RAF Binbrook in Lincolnshire like a kid in a sweet shop to go to work on 5 Squadron, who at the time were one of the two remaining Lightning squadrons.  There are many I’m sure, who like me, marvelled at the Lightning at airshows, it is, in my humble opinion a thing of beauty and power and a testament to the heyday of British aircraft engineering, like nothing else in the sky then or since it was the last all British fighter designed and built, it was a sod to work on and I loved it.  The Lightning and Binbrook are indelibly linked and as an aircraft and an RAF station are like no other, however my time there was achingly brief being posted after a year over to Cottesmore to work on Tornados,  but my time on the flight line at 5 taught me life lessons that have lasted me from that time to this.

March on the passage of time, some 35 years and I was contacted through the power of social media by a liney colleague from 5 asking whether I might be interested in working on a Lightning back at Binbrook that was in need of some TLC.  The allure of that was just too much, of course, said I and with little thought for the 270 mile round trip headed down there for a look see.  That was last year and although I did make a couple of the monthly meetings, life got in the way and I made precious few more but this year having discussed it with my long suffering better half I have committed to making all of the monthly engineering days lest for family emergencies etc.

XR724 was flown into Binbrook before the RAF closed it and she sits on what was formerly part of the pan in front of the old 11 Squadron hangar.  She looks a bit unloved and is in need of a new paint job (which we have a just giving page for) but mechanically she is in fabulous shape.  The goal for this year is get her repainted and to have the sound of those wonderful engines once again reverberating around that part of the Lincolnshire Wolds.

One of the real pleasures quite apart from the fact that I am a complete anorak is that working on the old girl is absolutely nothing to do with the modern world, everything is mechanical and although I don’t profess any level of mechanical knowledge save for working on my old 1991 Suzuki 125 it doesn’t matter.  The team of guys bent on getting XR724 back up and noisy is a complete mix of personalities, skills and abilities.  Each bringing something different all sharing the same passion.  The CAA has decreed that the Lightning will not fly again in the UK and there a couple doing fast taxis at Bruntingthorpe in Leicestershire which is a sight to see and I heartily recommend it.  724 is marooned where she is, the taxiway and runways ripped up and returned to farmland but to have her back up and running  is a dream to be fulfilled.  When I win the lottery I have an eye on the Quick Reaction Alerts hangars which still exist at Binbrook as a proper home but for now she’ll sit out being cared for by passionate volunteers.

For those who are interested I’ll pop out quarterly progress updates and for those on social media the links are: 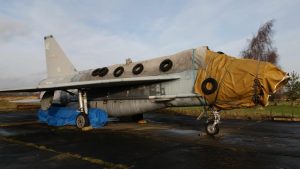 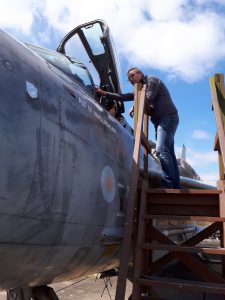 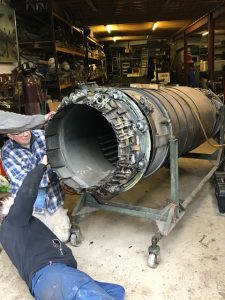 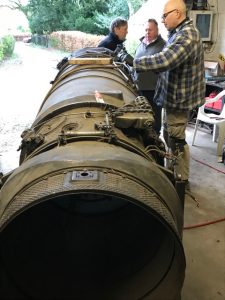