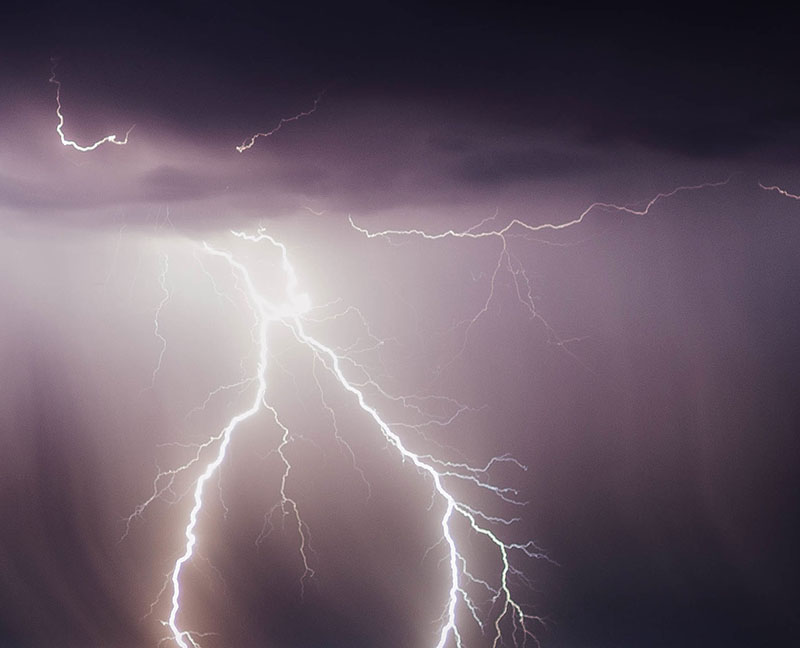 Lightning – can we really protect against it?

Many of us in the British Isles witnessed a spectacular display of lightning during what meteorologists referred to as the mother of all storms. Headlines reporting up 20,000 lightning strikes with some areas experiencing a month’s rainfall in one hour. As I watched the sky in awe in the small hours of the morning it brought home the stark realisation as to how insignificant we are when compared to the forces of nature.

Many properties were flooded, a number of properties were struck and suffered lightning damage and a telephone box burst into flames after the telephone pole was struck. The London Fire Brigade received over 500 calls as a result of the weather.

Stansted Airport also hit the headlines when aircraft were grounded when the fuelling system was rendered out of action causing lengthy delays and serious frustration and upset for passengers. Given the conditions, I was very surprised there were no other major lightning related problems. I thought that this was more by luck than design. But, when I arrived at my local station last night to catch a train up to London there were no trains. Cancellation after cancellation as a result of a signalling system failure following a lightning strike in Charlton.

Would be passengers were complaining about the rail company’s failure to protect their system against a lightning strike. I agreed with the sentiment because our line has been going through some challenging times. But, with all the sophisticated lightning protection systems and precautions available to us, surely it can only ever be best endeavours? Can we reliably protect against a lightning strike with 100% success?

Over the past 45 years I have witnessed many system failures resulting from one or more lightning strikes. Some of these have been catastrophic, taking out every item of network connected equipment. I have seen printed circuit boards where the conductive layer has separated from the board, components that have literally vapourised leaving the wire legs poking through the circuit board. I have also seen holes cleanly punched through steel equipment housings. Many of these incidents were in buildings equipped with lightning protection systems.

The majority of the lightning damage I have witnessed was the result of the energy from a lightning strike entering the equipment via the telecommunications, network or mains power cabling. This was more than an assumption as I generally take my clues from the internal damage on the equipment. If the damage is predominantly around the power supply I assume the energy entered via the mains cable and if the interface circuitry has sustained the most damage I assume the route in was the network cable. However, sometimes it is difficult to determine.

On one occasion when attending to the aftermath of a lightning strike in St Austell, Cornwall, it wasn’t so easy to determine. On arrival nothing was working, the kit would not power up. The fuses in the mains plug had blown and the equipment fuse in the chassis had disappeared – with the exception of two charred end connectors. The glass and fuse wire was gone. I also noticed a charred hole in the back of the equipment case. When I removed the lid the entire contents were destroyed with only a few components remaining. Nothing was salvageable, not even the housing. I had to determine the route in to see if there were any measures we could take to prevent this happening in the future. Especially as this was in an area prone to lightning strikes.

the equipment was damaged when the building’s lightning arrestor was struck and the equipment just happened to be on the other side of the wall from the copper conductor strip running down from the lightning rods.

I checked the mains and data cabling routes and after a while realised that the main data cable route mirrored one of the copper lightning protection system conductors on the other side of the wall. There were around 50 data cables connected to the system and It seemed that the cables were the lightning’s preferred path to ground via the equipment circuit board and chassis. The chassis grounding point and the mains cable were the exit.

I later discovered that the integrity of the lightning protection system had been damaged during recent building maintenance works. Lightning follows the path of least resistance, that’s why we have lightning protection systems providing the lowest resistance path to earth. It seems a reasonable theory that on this occasion the data cabling via the computer system which was very well earthed offered the path of least resistance to earth on this occasion.

This incident taught me never to underestimate the power of a lightning strike and never to assume a lightning protection system will actually protect me or the equipment. Like any system, it’s integrity and ability to perform in times of need is dependent on being professionally installed and maintained. But even then, there are going to be incidents that breech the protection. Lightning will zone in on a particular point on a building or structure no matter what. A good quality lightning protection system will offer one or multiple paths of least resistance to ground and that will be the most likely point the lightning strikes but nothing is guaranteed as there are many factors that are in play in the moment of the strike and we cannot mitigate for all of them.

I thought I would close on a handful of lightning facts:

Previous PostUnder Attack - The day cybercriminals launche...
Next PostJust how safe is our National Telecommunicati...