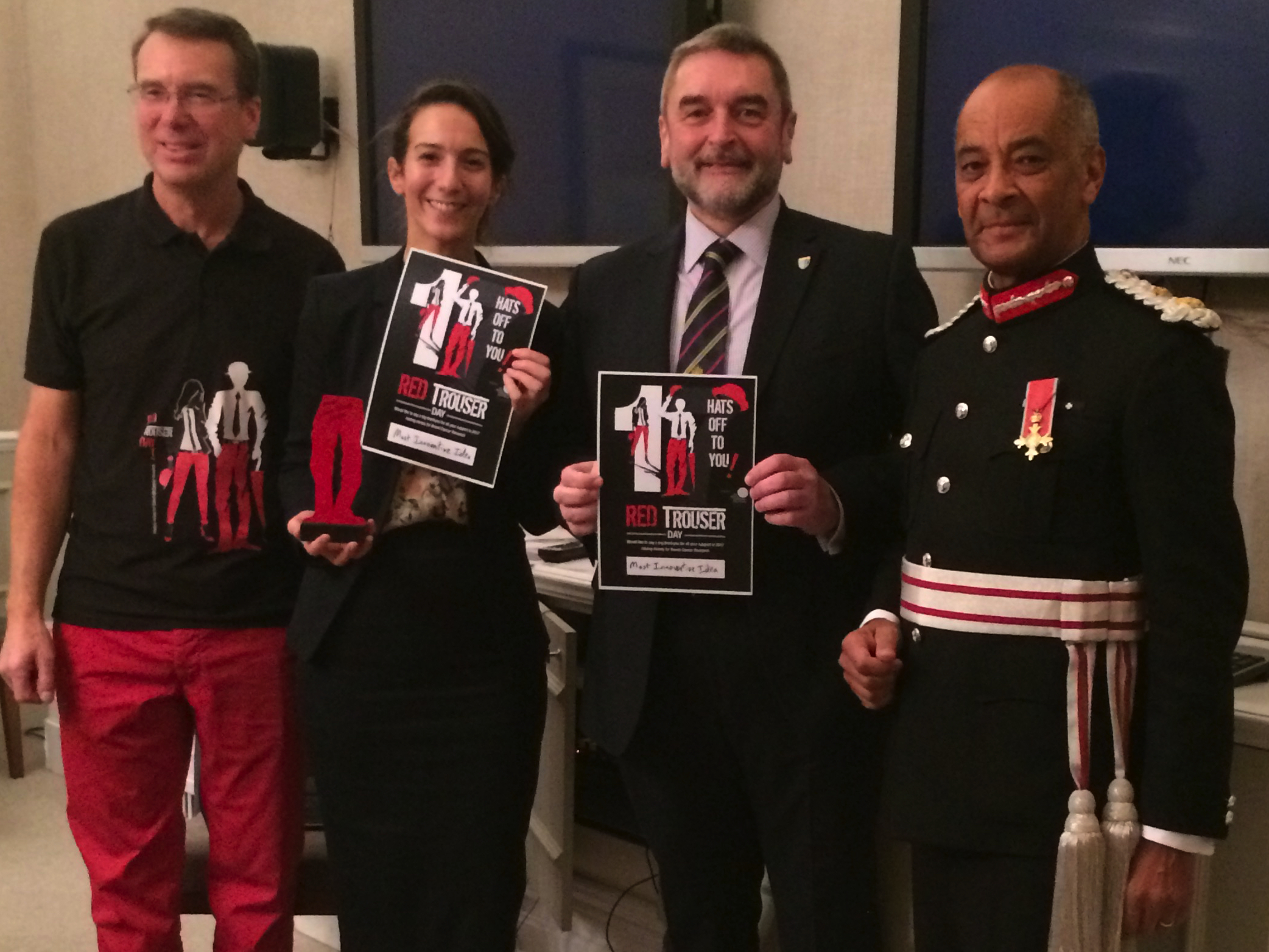 Although the Awards were a little ‘tongue in cheek’ the message and cause is very serious. Red Trouser Day was founded by Paul Finch to fund research in the very challenging and quite often taboo field of bowel cancer. Paul was diagnosed with stage 3 nearly 4 colorectal cancer with probable secondary to lung in Jan 2014. As a result of his treatment at the Royal Marsden, he overturned a 10% chance of making it 5 years to 99% full recovery without major life changing bowel surgery with thanks to the expertise of the teams at the Royal Marsden. Paul’s mission is to create an annual fun event to raise awareness & funds to support The Royal Marsden Hospital in specific targeted research, including: helping global leaders to create early detection methods; helping to fund technological improvements including robotics in the operating theatre and to help kick start a fund to support anxiety and create support for patient communities.

Steve Smith, Founder and CTO of Astro got involved when his friend Lillie Jamieson sent him a text telling him that she had volunteered to busk in 10 locations around London in one day. Steve commented “I received a text from Lillie telling me she had volunteered to busk around London and I was just about to reply to say, ‘well done’ when I realised there was more text below the screen. I scrolled down to the bottom of the text and the last line appeared ‘…do it with me, SAY YES!’ so I replied with ‘yes’ and then wondered what on earth I had volunteered for. Paul is a fellow Liveryman at the Worshipful Company of Information Technologists (WCIT) and I knew he was doing some great work raising awareness and funds for bowel cancer so my answer was always going to be ‘yes’.”

Astro support a limited number of important charities each year both with small donations and perhaps more importantly with direct involvement through volunteering or providing advice or services of a technical nature. These include Camp Cando and The Bud Flanagan Leukaemia Fund as well as a number of charitable causes through Steve’s Livery Company, the WCIT.

Lillie and Steve took their busking seriously spending many hours in the studio rehearsing material and working on harmonies making sure everything went well on the day. Lillie took overall responsibility for the event and in particular the musical content and arrangements (bearing in mind they had never worked together before), while Steve was responsible for project management calling upon his ingrained Astro project delivery experience to plan the rehearsals and busking day from start to finish. It was Steve’s project management that inspired Lillie to come up with the name for the duo – ‘Lillie and the Boss’. The duo set out a very modest target to raise £500 but by the end of the busking day on 19th October the combined web and direct donation total reached £1,200.

Last month, Lillie and Steve were presented with the ‘Most Innovative Fund Raising’ award by Patron Ken Olisa, Lord Lieutenant of London and Founder Paul Finch at a ‘thank you’ event at the Royal Marsden in London. Steve concluded: “The day ran very smoothly starting on the Southbank and finishing in Archway. It was a very rewarding and fun day and after a few hours it felt very natural just to pitch up, plug in and start singing. We managed to start in each location at the scheduled time and we met some friends along the way. I must just say that what we did was great fun and it was only a very small part of the overall fundraising campaign. The real credit must go to the team at the Royal Marsden as they are doing a truly amazing job and making excellent use of every penny raised by the Red Trouser Day volunteers.”

Previous PostWhat can we do to help our healthcare profess...
Next PostA super connected city below a city